A Journey Through Time: Tea Related Items at the ROM & PMA

Let’s take a journey through time.  I want you to think back…far back…now think even further back.  The year was 2008.  The place was Toronto, more specifically the Royal Ontario Museum.  How did I get there?  Well, that is quite a story, too long of a story for this already lengthy post.  Let’s just say I had a few hours to kill before a concert and I wanted to soak up some culture with a good friend.  After a few hours journeying through this fantastic museum, checking out the mummies and dinosaurs we ventured into a room with a quite a bit of teawares.  Needless to say, I was very pleasantly surprised.

I took a number of pictures, well as many as I could before I started to notice that people were getting annoyed with me.  Let me preemptively say that the pictures are terrible.  The night before I had been to a concert and the camera got banged around and refused to take a single unfuzzy picture my entire trip to Toronto.  Since the trip was in 2008 and I really had only taken these pictures for my benefit they are a bit disjointed.  Not every photo has a description and I have a description with no photo (probably the picture was discarded because it was too fuzzy).  I took pictures of the descriptions; since they are pretty fuzzy I typed them out so it would be a lot easier on the eyes.  Where there is a “(?)” that means I am not sure what the previous word is.  The description letter corresponds to the picture letter.  For instance description ‘A’ belongs to picture ‘A’.  At the end I threw in a few photos from the Philadelphia Museum of Art.  I took those pictures in 2006.  They are of a teahouse exhibit in the museum.

A-“Tea Box (1522-1591)”  “Tea utensils-Various utensils are used throughout the course of a tea ceremony, which sometimes includes the serving of food before tea.  While the art of tea lies in the harmony of the ensemble, individual utensils embody imaginative approaches to design.  Utensils made originally for other purposes, or made abroad, are sometimes adapted for use in the tea ceremony, a practice called mitate.  Tea utensils are treated with care-often first wrapped in fabric and stored in boxes made of paulownia wood.  A treasured item is sometimes accompanied by multiple boxes which authenticate its provenance.  This custom dates from the early 17th century when the maker or subsequent owners would write notes of authentication on the surface or back of the box lid.”

B-“Ceramic Tea Caddies-Tea caddies of various shapes and sizes have been a cherished component of the tea ceremony.  The ceramic type, cha ire, was used mainly to serve thick tea, and the lacquer type, natsume, for thin tea.  During the Edo period (1603-1868), high-ranking samurai vied to collect and trade famous old tea caddies.  Trading competition was so steep that a small tea caddy could command the equivalent value of an entire feudal domain.”

H. “Tea Scoop-Kobori Enshu (1579-1647)  attr. Bamboo (1600-1647 Edo period). This tea scoop is attributed to Kobori Enshu, a 17th century grand tea master.  A successor of the rustic tea tradition of Sen no Rikyu (1522-1591), Enshu added refined flavours to his blends.  In making tea scoops, Enshu often chose a slender shape and used stained or coloured bamboo.  This tea scoop is accompanied by one case and two boxes which indicated its precious significance to the original owner.”

I. “Tea room-Reflecting the simple, austere aesthetic of the tea ceremony, the teahouse roof is thatched, the exterior walls plastered with mud, and the interior designed with natural materials such as bamboo and tree bark.  A traditional tearoom measures only four-a-half tatami (woven reed) mats, totaling eight meters square.  In one corner is the tokonoma, an elevated alcove where a hanging scroll of painting or calligraphy and a vase of simple flowers are displayed.  The arrangement of tea utensils varies with the season.  From November to April, a sunken square hearth is used to heat an iron kettle; from May to October the hearth is covered with either a tatami mat or wooden panel and a portable round brazier is used.” 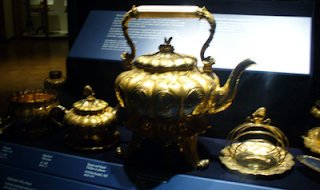 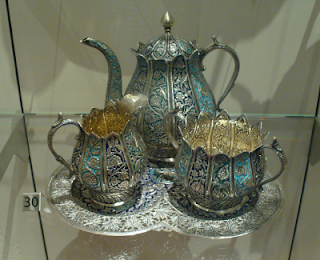 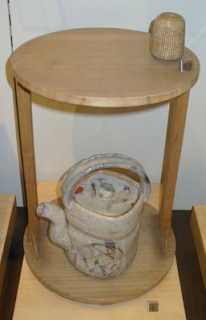 No Letter-“Tea connoisseurs prized the black-bodied bowls made in Fujian Province in southern China.  Northern potters copied these popular bowls by disguising the pale bodies of their own bowls with dark brown dressing and mimicking the streaked patterning of the southern glaze.”


This concludes our Royal Ontario Museum portion of this blog.  Now for some photos taken at the Philadelphia Museum of Art in 2006.  This is a permanent exhibit of a teahouse.  Also, check here for much more information about the Teahouse at that museum:
http://www.philamuseum.org/collections/permanent/41886.html  Also, threw in a few other photos. 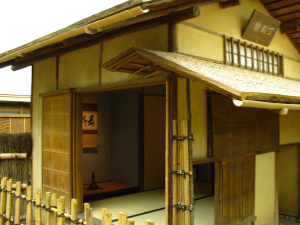 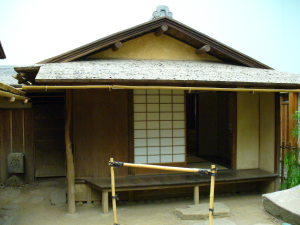 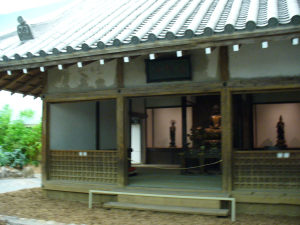 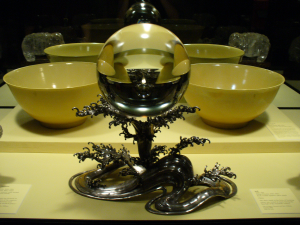 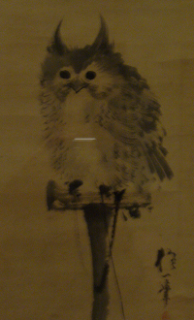 I hope you enjoyed looking at some pics from my journey.  -Stacy Lim
Posted by Butiki Teas at 4:14 PM