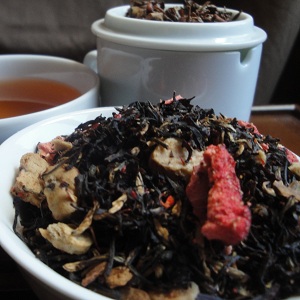 Back in October 2012, we held a Custom Blend Contest. For this contest, we asked that entrants submit up to 3 ideas for a custom blend.  A panel of judges chose their favorite 10 ideas and created a poll for everyone to vote for their favorite idea.  The top 10 ideas were:  Apple Dumpling, Banana Pudding Oolong, Chocolate Chip Cookie Dough Ice Cream, Grateful Castaway's Chilipaya Sweet Tropical Heat, Purple Honey, Rainforest Absinthe, Saffron Sesame Huangshan Mao Feng, Strawberry Rhubarb Delight, Thai Tea Cookie, and Tropical Movie Night.  Strawberry Rhubarb Delight, now titled Ruby Pie was the clear winner, though the Saffron Sesame Huangshan Mao Feng was awfully close.
Sarah submitted the idea and won 8oz of her own custom blend idea.  The initial description that won over voters was: Strawberry Rhubarb Delight pairs rhubarb and strawberry together with Golden Assam to capture the essence of Strawberry Rhubarb Pie. The fruit notes combine with the richness of the Assam to produce a delightful dessert tea as comforting as warm pie, fresh from the oven.
Here is how we describe the tea now:  Ruby Pie is designed to taste similar to strawberry rhubarb pie.  The pie crust notes are immediately noticeable followed by rhubarb and lingering fresh strawberry and vanilla notes.  Hibiscus adds a hint of tartness to supplement the rhubarb notes but does not overwhelm the tea.  Adding some sugar will intensify the strawberry and rhubarb notes while still maintaining the pie crust notes.

After the contest was over, we embarked on a several month journey to create Sarah’s ideal Ruby Pie blend.  This tea is just now being made available for at least a limited time.  This tea can be purchased here: http://www.butikiteas.com/Black.html.  Below is a short interview with Sarah and discusses her love of tea, the blend, and the contest. 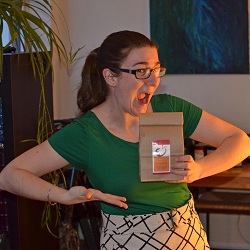 Tell us a little bit about yourself. I'm a Canadian, living in Toronto but originally from out west. I miss my mountains *sigh* I've only been doing this whole tea thing for 9 months or so - long enough to have a baby tea obsession! :) My other passions besides tea involve board games, travelling and as long as there's music i'm good to dance and make a fool of myself!

What are your tea preferences? I find that I am deeply in love with black teas, whether they are straight or flavoured! I'm gradually venturing into other things like puerhs and roasted oolongs. I don't mind greens and whites (or yellow) but i find them less intense than my blacks! I drink 95% of my teas without any additives but i do enjoy the occasional sweetened cup of cold brewed tea.

What are your tea rituals? Right now, I don't have a lot of tea rituals, unless you count getting together with tea friends as often as possible. I do have a gaiwan that I recently purchase from Stacy! That I am using to gradually use tea as a means to force myself to sit and take time away from the craziness. other than that, I suppose it's my morning weekday matcha smoothie that I take to work nearly everyday with my two travel mugs of tea - always one straight black and one flavoured :)

If you were banished to an island, what type of tea would you bring if you could chose only one? Uh...do i have to answer that? Eesh...I feel like this is a trick question. How about one that could multiply and make little tea babies for me so I never run out? :) I guess it would have to be either Premium Taiwanese Assam or Laoshan Black at the moment, though I can't promise that tomorrow that won't get a different answer.

What is your favorite tea from Butiki Teas? Why? I have no favourites! I hate Favourites. Mine change depending on a multitude of factors ranging from whether or not I've been able to watch Doctor Who, to the position of the sun in the sky. It would be FAR easier for me to tell you which teas I'm not a fan of...green oolongs, I'm looking at you! I'm a huge fan of your Premium Taiwanese Assam but I also really love Grapefruit Dragon, Cantaloupe & Cream; Maple Pecan Oolong (it's not green!); Creamy Eggnog; Mango Lassi uh..the list goes on!

How did you come up with the idea for Ruby Pie? To be honest? I'll enter any and every Butiki Tea contest out there. When this one came up I didn't have a lot of time to sit and be nearly as creative as everyone else was. I opened my fridge and there was one sitting there. So I went for it!

You also submitted two other tea ideas, Whiskey Sour and Pomegranate Grapefruit tea. Which of the three was your favorite? Probably the strawberry rhubarb, but I also think that you'd make a mean whiskey sour. Also, given the awesome Grapefruit Dragon you have....i think you could kill a pomegranate tea.

Were you surprised that the Ruby Pie won? uh....that would be like saying I was surprised at my ability to annoy people into doing what I want. :) Yes, but only because I thought there would be more votes. Less so if I think about the people I harassed to help me win *grin*.

Can you tell us a little bit about the custom blending process? Well, if people like the blend, it's 90% you doing all the heavy lifting, if they don't...it was all my fault haha. From a logistical perspective, Stacy does a great job working with even the most difficult of people who give her instructions like uh...it should have strawberry....and rhubarb and be like uh pie. :) I pretty much answered all of her questions in the most vague and probably irritatingly frustrating way possible. Once that was out of the way she took over and created a couple of sample batches for me to try. Those were sent to my place and it was left to my incapable hands to taste and provide feedback. Again, vague statements like "uh...it needs more pie" helped Stacy to refine her blend. It's at this point that I should mention that even though she's allergic to strawberries, she was tasting and refining the blend! Talk about dedication! Stacy perfected the batch and then sent me a giant bag of delicious goodness!

How did you come up with the name Ruby Pie? I wish I could take credit for that but once again, I had no part in it! That was all Indigobloom as I asked her, Raritea and Kittenna for some help and gave my favourite choices to Stacy to pick from :)

How would you describe this tea? It's Strawberry...it's RHUbarb! it's PIE! does that count? haha

Who would you recommend this tea to? Anyone looking for a flavoured black strawberry, rhubarb tea, as most that I've seen have been either white or rooibos! The hibiscus in this one isn't very present, so hibby haters shouldn't be afraid! :)

We had a great time creating this tea!  We hope you enjoy this tea as much as we enjoyed creating it!
-Stacy
Posted by Butiki Teas at 1:46 AM 6 comments: